Nasal cleaning has been incorporated in folk medicine in many areas of the world and is a natural method of medical treatment.

Fishermen all over the world have rinsed their nasal passages with salt water for generations. In some African tribes nasal cleansing is referred to as a «purifier of thoughts», i.e. clearing the head. In the Yoga tradition nasal cleansing is one of several cleansing processes.

Yoga is an ancient system of practical methods used to increase physical and mental well-being. The use of various Yoga techniques is spreading rapidly in our culture today. The cleansing technique of brushing the teeth has been practiced for thousands of years in the Yoga tradition, but it has only been common in Western culture for about 100 years. Now nasal cleansing is also becoming more widespread in our culture.

Saltwater is the natural solution for the mucus membranes. No chemicals added, no side effects. Cold water and fresh water irritate the mucus membranes. Therefore the water you use for nasal cleansing should be somewhat salty and it should be at about body temperature. The body fluids contain 0.9 % salt. There are 2.7 grams of cooking salt (1 measuring spoon) to 3 dl water in Rhino Horn. The water may be boiled first if you are unsure of the quality of the water. It is possible to pour cold water into Rhino Horn and heat it in a microwave oven if preferred. 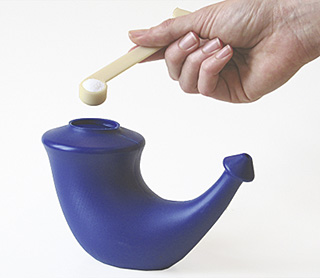 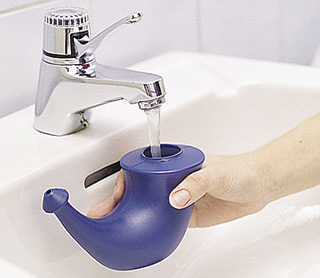 Rinses the nasal passages, relaxes the mucus membranes, sharpens the senses. The water runs through the nostrils by itself.

Follow the next steps closely. Should there be a problem, read further for help with possible mistakes you may be making. 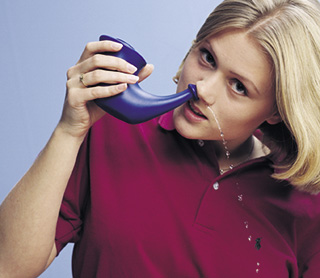 The nose is emptied of any remaining water. Result: open nasal passages, pollen and dust rinsed away- It feels good!

Make sure there is no water remaining in the nose and sinuses after nasal cleansing. It is not good for the mucus membranes to have water there for long periods - especially in the winter. There may be no water left inside, but check in case some remains: 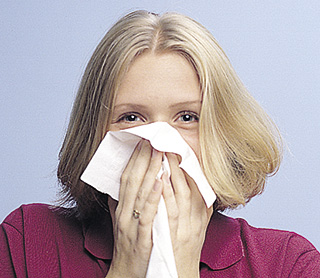 Ear nose and throat doctors recommend you to look upon a Rhino Horn as a personal device - just like a tooth brush. If, though, more people are going to use the Rhino Horn after one another, it must be rinsed with boiling water. The Rhino Horn may be washed in a dishwasher if you prefer.

Made of recyclable and environment-friendly hard plastic (PEHD).

Brand
Yogaprosess
Do you need help? Do you have any questions?Ask a question and we'll respond promptly, publishing the most interesting questions and answers for others.
Ask a question
Ask a question
Write your opinion