The orthosis is available in three sizes and can be adapted individually as the child grows. The Tübingen hip abduction orthosis also distinguishes itself through easy handling. Parents can put the orthosis on and remove it easily thanks to the practical closures. It is corrosion resistant and washable. The terry cloth covers of the shoulder harness can be removed and washed.

In a multi-center study conducted in 20 clinics in Austria, Switzerland and Germany, Tönnis (1999) carried out a comparison of all commonly used treatment methods. The results of the infant hips which were treated with only one orthosis were evaluated. Tönnis compared the improvement of the bony alpha-angle in the sonograph according to Graf, from the beginning to the end of treatment.
The result:
The most favourable position for risk-free development of the hip joints is what Fettweis calls the seated squat position and which Salter calls the human position, in which the hip joints are bent in excess of 90 degrees and abducted by about 40 degrees. Orthoses which provide these conditions and which prevent uncontrolled abduction with a spreader bar achieve grade I (complete maturing with alpha angle 62 degrees as the lower boundary) in 98 percent to 99 percent of all cases analysed by Tönnis. The Tübingen hip abduction orthosis meets all of the above requirements fully.
Over 100 000 Tübingen hip abduction orthoses were used between 1987 and 2000, primarily in German-speaking regions. Not a single case of femoral head necrosis is known.
Technical parameters
Brand
Otto Bock
Ask a question
Write your opinion

Baby hip dysplasia - how to treat it?

We are more and more sick nowadays. This is due to a lot of pollution in the contemporary environment, poor lifestyle and poor food quality. The health status of parents can have a significant impact on the health of their child. Unfortunately, often neglect during pregnancy results in abnormalities in the early life of the child. One of such disorder is dysplasia.
Read more 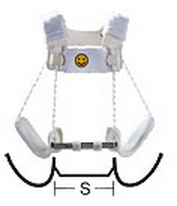