Back braces and Spine support 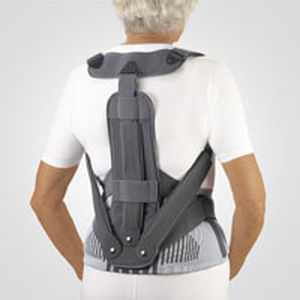 The spine consists of 24 separated and approx. 9 or 10 other vertebrae, which are ossified in the sacral and coccyx segment. In regards to function, they can be divided into following sections:

Specialties of the individual spinal sections:

Motion patterns of the spine

The human spine is curved in the shape of a double-S and as ?elastic pole?, ensures the human upright walk (homo erectus). Further to the static tasks, carry loads, the spine is very flexible, especially in the upper sections. Therefore, following motion sequences are possible:


Basic shape of a vertebrae

The vertebral body carries the load, the vertebral arch surrounds and protects the spinal cord, the processes ,function as lever for muscles and ligaments.

The 23 intervertebral discs, also called spinal disks, connect the single vertebral bodies and consist of an outer tissue ring (anulus fibrosus) and a soft gelatinous core (nucleus pulposus). These spacer disks allow motion in the spinal segment and have a shock absorbing function.

This is a collective term for all painful disorders in the segment of the cervical spine. By compression of the nerve roots many different diagnoses can be specified, such as stiff neck, migraine or pain radiating into shoulder or arm. During traffic accidents, the cervical spine is a predestined site for injuries, due to acceleration and at the same time inertness of the head.

A metabolic disease of the skeleton system with loss of bony substance . Due to the decreasing bone density, the fracture suspectibility increases especially at the disk bodies (respectively neck of femur, distal radius head). There, caused by the axial load, vertebral deformities, deck plate drops (?sinterings?) and roundback deformity occur increasingly.Next to the development of a rounded back, this disease can cause pain. Bedriddenness and immobilisation see tlso hyperextension orthoses & and osteoporosis braces.

Sciatica and low back pain syndrome

This is a collective term for pain in the section of the lumbar spine and also known as lumbalgy, lumbosacral radiculopathy and lumbago
The cause often lies in irritation or compression of the nerve roots by the spinal disks.Often, overweight in combination with week abdominal and back muscles are responsible for this disease pattern (hollow-back/hyper-lordosis). Also, degenerative symptoms are often experienced in this spinal section and for the affected person, can also be rather painful.


All Back Braces & Supports
Show more entries from July 2016